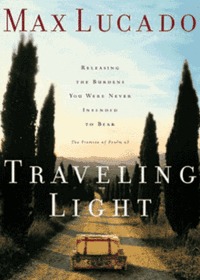 Feel the need to throw off the cumbersome burdens that weigh you down?

Certainly, responsible adults learn to adjust to tremendous stresses and equip themselves to carry the heavy weights of self-reliance, weariness, worry and hopelessness over the long haul.

But this is not necessary, says bestselling author Lucado (Just Like Jesus; He Chose the Nails; The Applause of Heaven).

In Psalm 23, God counters the misconception that burden-bearing signals Christian maturity and admonishes followers to leave their loads at Christ's feet, as he is the only one truly equipped to handle the weight.

Lucado dissects Psalm 23 while recounting tender tales of men and women who have overcome crushing circumstances with Christ's support.

In keeping with Lucado's typical homespun style, humorous anecdotes often precede powerful punches of biblical truth. Rounding out this collection of essays is a study guide encapsulating each chapter's topic.

Readers will travel back, up and on as they reread key excerpts, study pertinent Bible verses and allow the lessons to take root.

This insightful collection not only measures up to the high standard of Lucado's own previous works, but his profound perspective on life and spirituality frequently exceeds expectations. (Oct.) Forecast: This should be quite a boost for the recently christened W Publishing Group (formerly known as Word), whose cup runneth over with Lucado.

Sales for He Chose the Nails have reached 720,000 copies, while Lucado's recent devotional, Grace for the Moment, has sold 600,000 copies for J. Countryman. W will spend a cool half million in shepherding this title toward the green pasture of bestsellerdom.

Chapter 1
The Luggage of Life
I've never been one to travel light.

I've tried. Believe me, I've tried. But ever since I stuck three fingers in the air and took the Boy Scout pledge to be prepared, I've been determined to be exactly that prepared.

Prepared for a bar mitzvah, baby dedication, or costume party prepared to parachute behind enemy lines or enter a cricket tournament. And if, perchance, the Dalai Lama might be on my flight and invite me to dine in Tibet, I carry snowshoes. One has to be prepared.

I don't know how to travel light.


Fact is, there's a lot about travel I don't know. I don't know how to interpret the restrictions of a supersaver seat half price if you leave on Wednesdays during duck-hunting season and return when the moon is full in a non-election year. I don't know why they don't build the whole plane out of the same metal they use to build the little black box. I don't know how to escape the airplane toilet without sacrificing one of my extremities to the jaws of the folding door. And I don't know what to say to guys like the taxi driver in Rio who learned I was an American and asked me if I knew his cousin Eddie who lives in the US.

There's a lot about traveling I don't know.

But most of all, I don't know how to travel light.

Every travel-catalog company in the world has my credit-card number. I've got an iron that doubles as a paperweight, a hair dryer the size of a coach's whistle, a Swiss Army knife that expands into a pup tent, and a pair of pants that inflate upon impact. (On one flight my wife, Denalyn, gave me a swat on the leg, and I couldn't get out of my seat.)

I don't know how to travel light. But I need to learn. Denalyn refuses to give birth to any more children even though the airlines allow each passenger three checked bags and two carry-ons.

I need to learn to travel light.

You're wondering why I can't. Loosen up! you're thinking. You can't enjoy a journey carrying so much stuff. Why don't you just drop all that luggage?

Funny you should ask. I'd like to inquire the same of you. Haven't you been known to pick up a few bags?

Odds are, you did this morning. Somewhere between the first step on the floor and the last step out the door, you grabbed some luggage. You stepped over to the baggage carousel and loaded up. Don't remember doing so? That's because you did it without thinking. Don't remember seeing a baggage terminal? That's because the carousel is not the one in the airport; it's the one in the mind. And the bags we grab are not made of leather; they're made of burdens.

The suitcase of guilt. A sack of discontent. You drape a duffel bag of weariness on one shoulder and a hanging bag of grief on the other. Add on a backpack of doubt, an overnight bag of loneliness, and a trunk of fear. Pretty soon you're pulling more stuff than a skycap. No wonder you're so tired at the end of the day. Lugging luggage is exhausting.

What you were saying to me, God is saying to you, "Set that stuff down! You're carrying burdens you don't need to bear."

If we let him, God will lighten our loads. . . but how do we let him? May I invite an old friend to show us? The Twenty-third Psalm.


The Lord is my shepherd;


Do more beloved words exist? Framed and hung in hospital halls, scratched on prison walls, quoted by the young, and whispered by the dying. In these lines sailors have found a harbor, the frightened have found a father, and strugglers have found a friend.

And because the passage is so deeply loved, it is widely known! Can you find ears on which these words have never fallen? Set to music in a hundred songs, translated into a thousand tongues, domiciled in a million hearts.

One of those hearts might be yours. What kinship do you feel with these words? Where do the verses transport you? To a fireside? Bedside? Graveside?